The host country, Monaco, was the winning nation of the 14th edition the year before, which gave them automatic hosting responsibilities for this edition, as well as automatically qualifying them to the Grand Final. The other countries were obliged to compete in three semi-finals, with each being distributed randomly through a random draw. During the semi-finals, 36 citizens participated in a fight to the death until only between 11 and 12 citizens remained, with the remaining qualifying for the Grand Final in which another fight to the death would take place, this time until only one remained.

The winner of this edition of the Eurovision Battle Royale was Larya Elefterov of Russia. He beat Théo of Belgium to death in the final showdown, causing him to finish as the runner-up. Villette Lampron of France, Diana Bumgarner of Austria, and Turan Cavadlu of Azerbaijan completed the Top 5. The host country, Monaco, had a disappointing Eurovision, with it's citizens finishing in 31st and 32nd place in the Grand Final. Larya Elefterov nevertheless became the youngest winner of the Eurovision at age 15.

The Arena for this edition was decided on the September 12th, 2029. Due to Monaco's small size, the Arena ended up being less than half the size of the previous smallest Arenas. This lead to a very quick Battle Royale, which only lasted from June 20th to July 11th. 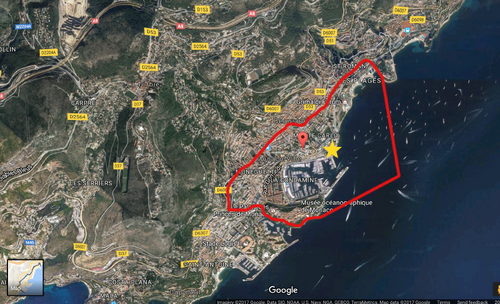 View of the entire Principality of Monaco.

Section of the harbor, showing off the mountains and cliffs. 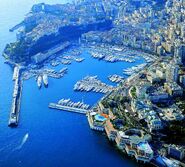 Another view of the harbor, from the sea.

One of the many narrow streets of Monte Carlo.

These parties aren't obligatory however, and some alternatives to this include immediately moving into the Citizen's Village (usually a high-tec tower or complex located in or near the city center of the most populous city in the host country). In any case, citizens are obliged to move into the Citizen's Village before the 20th of May, 2030. This is because each citizen needs time to get their fitness up and competitive to put on an entertaining TV show, as well as acclimate to the host country. The EOs provide each country and citizen with their own team of trainers, cooks, stylists, and other specialists free of charge to ensure that each citizen can become fit and competitive enough so the Battle Royale will be as entertaining as ever. For the month that the citizens live there, they are encouraged to learn survival techniques and work out so their chances of survival in the harsh Arena increases.

The first semi-final took place between June 20 and June 24.

The second semi-final took place between June 21 and June 25.

The third semi-final took place between June 22 and June 27. 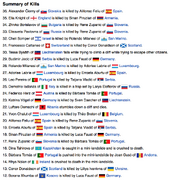 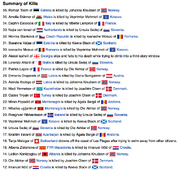 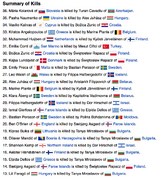 Welcome to the start of the Eurovision Battle Royale 2030. In just under 5 minutes, thirty-six of Europe's finest, most brave citizens will be raised onto their pods going into the Arena, and in what will likely be two weeks, only one will emerge as the sole victor and Champion of Europe. We can only imagine how nervous and anxious the fans from the finalist nations must be, and how even more nervous their citizens must be!